Alternative Ballistics is a Bad Idea

In the wake of the tragedy and media circus that followed the death of a man in Ferguson, Missouri recently the Ferguson Police Department went searching for alternative forms of lethal force. What they ended up finding was a form of less lethal force made by “Alternative Ballistics” out of California. 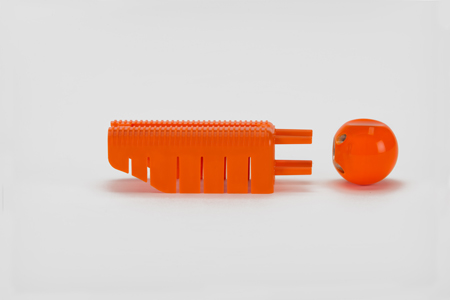 A new form of less lethal force deemed “The Alternative”

“The Alternative™” is an attachment that can be added to the top of the slide of most firearms you’d expect law enforcement to use (Glock, Smith & Wesson, etc). The premise of this more than unique looking tool is to catch or capture a bullet when it’s fired. The energy from the bullet then is transferred into this new projectile, breaks off from the large carrier that is covering the slide of your pistol, and will strike an individual with significant force, but will not kill them. The Alternative™ is meant to decrease the risk of death in situations where force is required.

I do not doubt the efficacy of this new product because I would absolutely not want to be struck by a metal ball that is propelled by a 9mm, .40 S&W, or .45 ACP bullet. That’s gonna hurt like hell! Also, once you shoot this initial less lethal force round the carrier flies off of the slide of the pistol so law enforcement can use their firearm as they need to for any given situation. The product appears to be very reliable, well thought out, and basically a great “alternative” (see what I did there).

What I don’t like about this product is the way the media is already selling this product. Here is a recent news release from San Diego Fox 5 News explaining The Alternative™.

Seems to be a pretty straight-forward and informative piece on a relatively new product, but they use a lot of key phrases that I think could be very damaging to law enforcement.

One statement the reporter made was that if you see a law enforcement officer with The Alternative™ on their pistol they’re “signaling [his/her] intentions not to kill the suspect.” In a frank sense, that is very true, plain and simple. I can already see people spinning those words around though and making blanket statements like, “Any law enforcement department that does not use The Alternative™ is signaling their intent to kill people!” The last thing I would want to come from this product is for people to say it has to be used by everyone because that’s going to hinder a lot of departments. Some departments may not be able to afford this new product or its training. It may also create difficult self-talk with law enforcement officers, slow their reaction time to dangerous situations, and endanger their lives even further.

At the end of the video, the reporter stated that you can be assured of two things if you see The Alternative™: “it’s an extraordinarily dangerous situation, and that the officer did not want to kill.” Once again, I only see with statements and advertising for this product like that it doing harm to law enforcement. If an officer justifiable defends his/her own life while on duty and kills a suspect while serving our communities people will bash that individual if they did not use The Alternative™. Why didn’t the officer use The Alternative™? They’re killers! That department doesn’t know what they’re doing because they don’t have less lethal force tools!  Well, the fact of the matter is law enforcement does have less lethal force tools. They have pepper spray, stun guns, asps or batons, and some departments even have bean bag firearms or other tools at their disposal.

I have no military or law enforcement background whatsoever and I know this. This seems like common knowledge to me, but apparently people forget that law enforcement have these tools available to them. It is not like they are devoid of less lethal force tools, and their firearms serve a strong and distinct purpose of force. 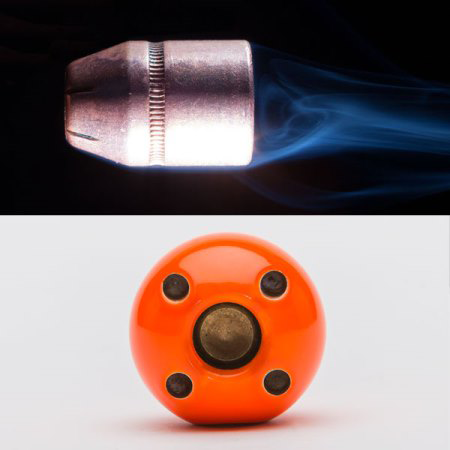 A final word of caution I would give to any individual contemplating using this less lethal force tool, or any law enforcement department thinking of embracing this product is that it may not be as less lethal as you think. If an individual is struck in the face, the throat, their chest (if they would happen to have a pacemaker), or if the suspect isn’t an adult, but a child or teenager, The Alternative™ could still kill someone. If you find my given situations unlikely, consider that most law enforcement have a hit percentage of 35% or less. When you’re under extreme duress or you’re life is threatened with death, you’re not going to shoot well. It’s a fact. I’m not knocking law enforcement at all when I bring up that statistic either. Those numbers are applicable to everyone (I’d personally probably shoot much worse than 35%), but the fact of the matter is there is potential for The Alternative™ to not hit center mass.

All in all, I believe The Alternative™ is a good product. For those that don’t believe in the force of bullets as a means of defense, but still want a firearm (seems like an oxymoron) then The Alternative™ serves a great purpose. I think for civilians, there is definitely a market for this. When it comes to law enforcement though, all I see is a media frenzy, and that’s something I never want to see. Our law enforcement already has an under-appreciated job and the last thing they need is to be ridiculed and micro-managed even more.