As you may have heard or shall soon find out, the Bureau of Alcohol, Tobacco, Firearms and Explosives (BATFE or ATF) has been very busy since the start of 2015! My first thought: good, our tax dollars at work! But no, no, no… whenever the ATF does something recently it doesn’t make very many people happy. Here’s a short list of what their handy work has accomplished.

#1 – Changed the Definition of what “Manufacturing” Firearms is

The third issue is the most recent and quite possibly the most pressing. This has already caused panic for some people and they’re buying up large quantities of the M855 ammunition. Part of the reasoning for the ATF’s new standing on this type of ammo being banned is because of its recent rise in popularity with AR pistol shooters. The ATF believes that this rifle caliber when fired from AR pistols now falls under their classification of banned pistol calibers. This was a non-issue when the original “Gun Control Act of 1968” (GCA) was written because AR pistols weren’t readily available or popular with civilians.

So let’s talk about different kinds of military ammo that we can use (or now can’t). 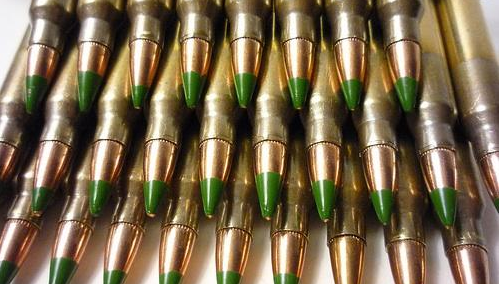 M855/SS109 – Poor Combat, but Accurate Round: The ammo that is now in question is M855/SS109. The “SS109” designation is just a second common name for the same ammo. It is a 62 Grain bullet in a 5.56mm NATO caliber with a mild steel penetrator core. It is deemed “inhumane” by many because of the “pencil holes” it creates in combat. This round often is not impactful or damaging enough to diminish a threat allowing opposing forces to continue fighting if shot. Where it fails in knockdown power though it more than makes up in accuracy. Many recreational shooters love this round because of its consistent accuracy over long distances. This round used to be exempt from the GCA, but now is being reclassified as “armor piercing” and thus the reasoning for being banned.

M193 – Range Round: This is the 2nd most common military load for 5.56mm NATO/ .223 Rem. It is a 55 Grain FMJ bullet that has found great popularity with recreational shooters because of its consistent shooting across a wide range of twist rates and barrel lengths.

Mk318 – Good Combat Round: This is a 62 Grain Open Tip 5.56mm NATO round that has proven to be much more effective in combat. With the open tip design it creates a larger wound channel and is significantly more impactful. The U.S. Marines recently adopted this round while in Afghanistan.

Mk262 – Good Combat Round: This is a 77 Grain Open Tip 5.56mm NATO round that has also been recently utilized by our military. Those in our military who are Designated Marksmen and Special Operations Forces are given this round because of its impactful bullet tip design and heavier grain weight.

Now that we have a fair understanding of some of the rounds our military uses we’ll take a look at how the ATF defines what rounds are legal and illegal. The GCA tries to ban any pistol rounds that are capable of penetrating armor in order to protect law enforcement and common citizens. As a result, the ATF prohibits the manufacture, importation, and sale of any pistol ammunition with a core consisting of any of the following: steel, iron, brass, bronze, depleted uranium, beryllium copper, and/or tungsten.

The ATF is now banning M855 ammo because of the popularity of AR pistols and their common accessory the SIG SAUER arm brace. The M855 rifle ammo now falls into a new classification of pistol ammo because of its wide use in AR pistols; thus, BANNED.

My main concern from this decision isn’t that we’re losing an accurate range round or that the ATF is grasping at straws with this decision (because they absolutely are), but they are actually going to make the ammunition environment worse. Let’s take a step back and examine all of this. The ATF is reclassifying M855 as “armor piercing” and they think they’re protecting us by removing a notably poor combat round off the streets. So if American citizens cannot buy poor combat rounds then that only leaves us the ability to buy… good combat rounds. Ones like the Mk318, Mk262, or other impactful ammunition. So the ATF’s decision does little to nothing to further protect us. Personally, it seems stupid at best to ban what they deem to be dangerous rounds (because banning other things that they deem dangerous, like heroin, has worked so well in the past).

So here’s the take home message. M855 ammo IS legal to own. When the ATF says, “it is illegal to manufacture, import or sell” this specific type of ammunition they’re talking about true manufacturers like Federal Premium, PMC, IWI, etc. It is likely to dry up extremely fast and you might need to pay a pretty penny now to get some, but it is not illegal to own. Also, M855 ammo is not banned and illegal… yet. They released an initial statement of sorts and they now are having a 30-Day comment period. If you want to be able to still change their minds, there are one of three channels you can go through:

The comment period deadline is March 16th, 2015. So if you would like to have your voice be heard please get your comments in by that date. I hope this article helped you better understand this decision by the ATF. If you would like to read the ATF’s position yourself, page 15 outlines it the best and is linked below.