There are a lot of firearm companies out there who always are chasing for that pole position of coolest new firearm in the industry. Browning has never been the company to introduce a new firearm model every year, or to tweak old ones by adding new finishes or colors. But when they announced some time ago they were producing a new model pistol, much of the industry held its breath.  The unveiling of a center-fire M1911 in a .380 ACP chambering was a complete surprise and is a great tribute to John Moses Browning (the inventor of that caliber and model).

The Browning Black Label 1911-380 is a very viable option for carry and is substantial enough to make for a great range pistol. Its only direct competitor is the Rock Island Armory “Baby Rock”. If you’re searching for an authentic M1911 based merely on appearance (we’ll get to quality and craftsmanship later) then the Browning Black Label 1911-380 is hands-down your winner. Its field strip is identical to a Government-size M1911 or 5″ barrel counterpart. It also maintains the traditional M1911 grip angle and has a matte black finish which gives it a familiar attractiveness. 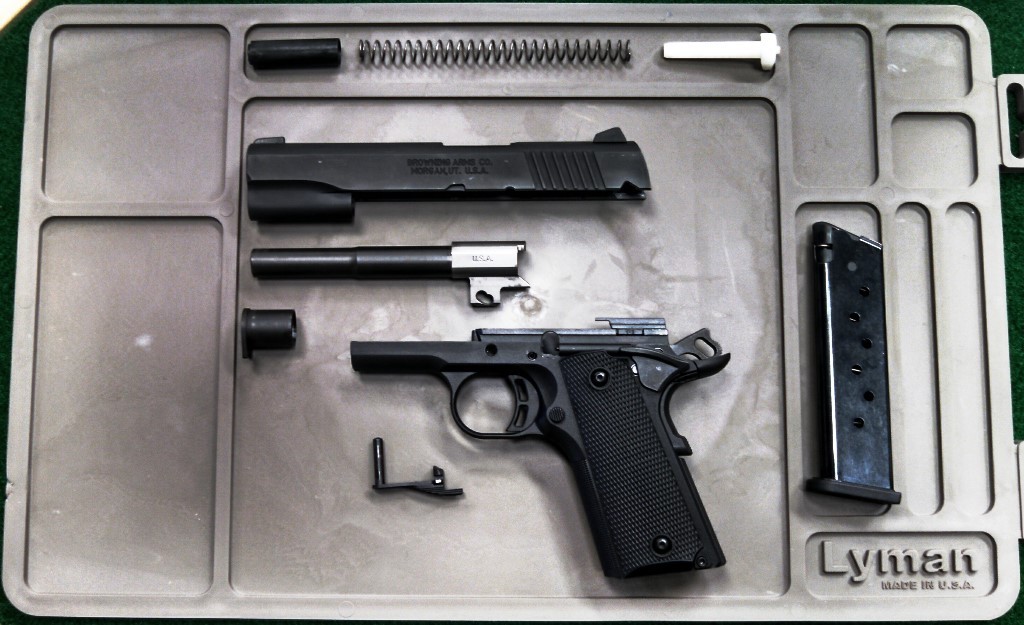 The Browning Black Label 1911-380 is unique because of its combination of metal and polymer parts. The slide and barrel are constructed from Machined Steel, whereas the frame, G.I. Guide Rod, and Recoil Spring Plug are made from a significantly lighter composite material.

Slide & Barrel made from Machined Steel

What truly impressed me upon further inspection was that the barrel had a Recessed Target Crown! Normally, I have only encountered that on Target-Grade rifles, definitely not .380 ACP pistols. This ensures better accuracy as the bullet leaves the barrel. It also ensures longevity for your pistol if your middle name happens to be “Clumsy,” and you’re known for dropping your pistols and denting the crown (no judging coming from us, Browning is looking out for everyone). 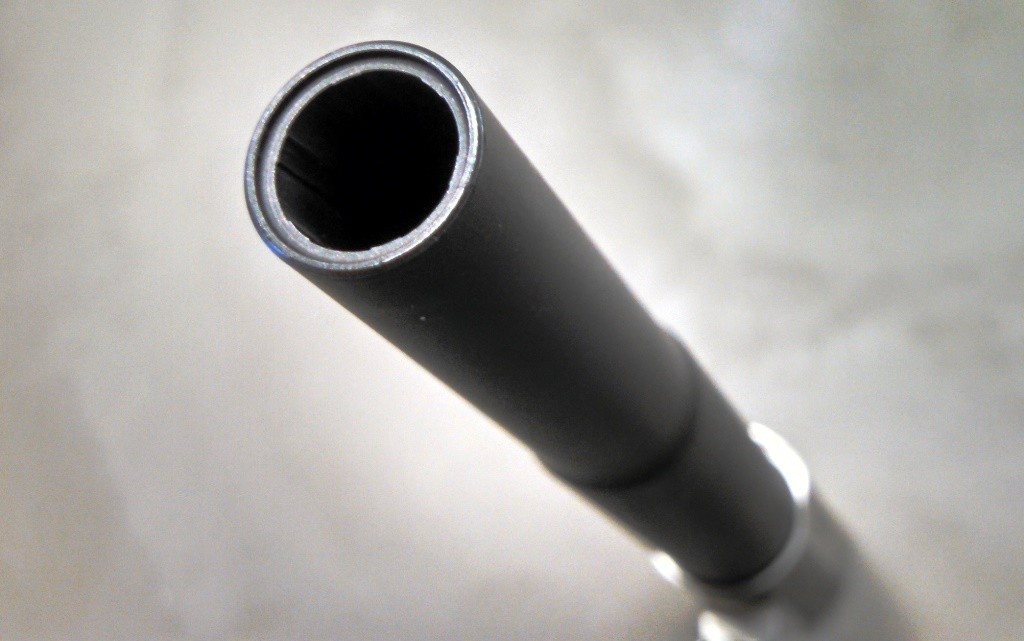 There are some composite pieces that did create some concern in my mind initially. Both the G.I. Guide Rod and the Recoil Spring Plug are made from a composite material. Being as this is a .380 ACP pistol though, and it will not be punished by a larger caliber like .40 S&W or .45 ACP, it is not as big of a deal as it sounds. Similar to the surprising fashion of the Target Crown on the barrel, the Recoil Spring is actually closed on both ends, which means there is nearly no chance of it uncoiling or binding inside the firearm. 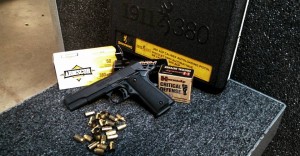 When I hit the range with my shiny new pistol, I tried out 4 different flavors of ammunition:

On this first trip to the range I did not have a bench or pistol vise available, so a raw accuracy test wasn’t performed. For those who have shot a lot of government-sized M1911 pistols before, the Browning Black Label 1911-380 has a little bit of a learning curve as far as the grip you’ll need. Whereas a government-sized M1911 fills your hand completely, the Browning Black Label 1911-380 is obviously smaller and required me to squeeze my grip more tightly as to not torque the pistol while pulling the trigger. After a couple magazines I learned this and began to tighten my groupings. 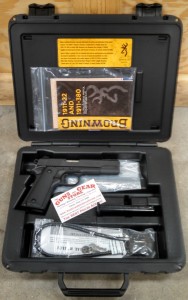 Browning Black Label 1911-380 – Purchased from The Guns and Gear Store of Rogers, MN

The firearm functioned flawlessly and the accuracy was absolutely on point! The only ammo that gave me trouble was the CCI Blazer. There were 5 rounds out of 50  that tried double-feeding into the chamber which was easy enough to trouble-shoot, but was still enough of an annoyance that I won’t have any more Blazer in the Black Label‘s diet.

The black-on-black iron sights leave something to be desired, but in an indoor range it was no problem at all. I also searched the shelves of The Guns and Gear Store and there weren’t too many holster options available for this unique pistol, but Blackhawk! did have some nylon options that work.

Next, to get a hold of Browning and start shopping around for some grips with a little more curb appeal. The grips that Browning has available for their Model 1911-22 will also fit the Browning Black Label 1911-380. I am most interested in the imitation pearl and aged ivory grips myself, but they have 4 total to choose from.

For people who are interested in the .380 ACP caliber for possibly defense or the range and like the M1911 platform, the Browning Black Label 1911-380 is definitely a MUST to add to your collection! This firearm definitely has my approval!