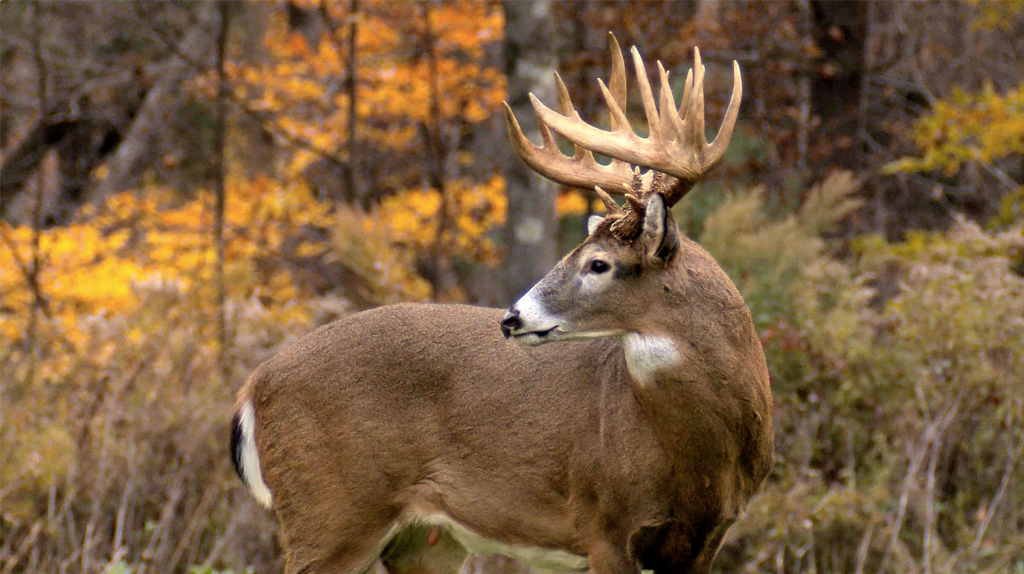 When people speak about Camp Ripley and deer hunting in MN, we begin to conjure up images of huge whitetail deer. A whitetail that is truly a once-in-a-lifetime buck; Da Turdy Point Buck! The reality though is that there are a lot more deer harvested that fill freezers than fill up wall space. Most recently, hunters can’t even do that. Since 2008 the deer harvest has been consistently dropping to less than a 1/3 of what it used to be. There are all kinds of ideas as to why this has been happening with ideas ranging from plausible ones to others which just make you scratch your head. One thing is for sure though, when you speak strictly numbers, less and less deer are being tagged every year.

Some people are attributing the low harvests to the possibility that we’re over-harvesting Camp Ripley. It is a finite area of land and between youth, disabled, veteran, and general public hunts a lot of deer are taken every year. Over time it is very possible that we’re picking away at the population faster than it can naturally replenish itself.

Another idea is that the deer population in Camp Ripley is going through an “ebb-and-flow” of sorts similar to grouse populations rising and falling every 10 years. Most deer populations do not exhibit behavior like this though leading most people to not believe this. Whitetail deer are more greatly affected by outside sources such as man or other predators. 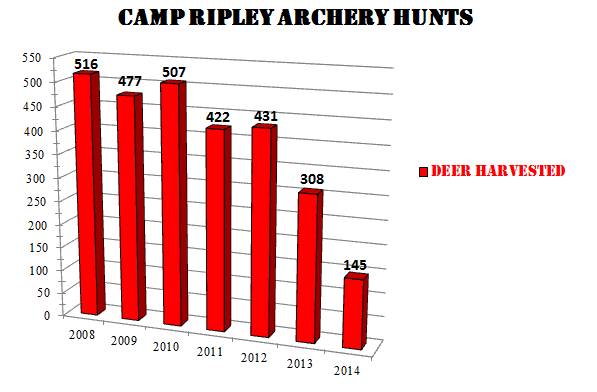 The final idea, which seems to be the most popular, is that the growing presence of wolves is destroying the deer population. Wolves were first confirmed in Camp Ripley back in 1996 and their presence has only gotten stronger and stronger since then. If you factor in that a single wolf typically eats 20 deer a year, and with modest estimates of 30 wolves in Camp Ripley, that’s potentially 600 deer per year eaten by wolves alone! If you begin to factor in the amount of deer harvested by humans as well the low deer population starts to make sense.

What’s even more startling than the low harvest numbers is that for the 1st time in an extremely long time there are surplus tags for Camp Ripley! A hunt that normally has thousands of people chomping to get into it this year did not have enough applicants where a lottery was even necessary. Every single applicant got a tag this year! If you’d like to get in on the action you can buy a tag over-the-counter beginning September 18th at 5:00 PM where licenses are sold. The 1st weekend hunt (Fri & Sat, Oct. 15-16th) has 656 extra permits available, and the 2nd weekend hunt (Sat & Sun, Oct. 31st – Nov. 1st) has 123 permits available.

If you have any questions about the Camp Ripley Archery hunt, visit the MN DNR’s website for more info or follow this LINK for an overview of the hunt.

For anyone lucky enough to hunt Camp Ripley this year, you will be allotted one tag (either sex), and bonus tags can be purchased for antlerless deer as well. Although the last few years have not been the greatest maybe this year will be the beginning of an improved harvest. We can only hope.