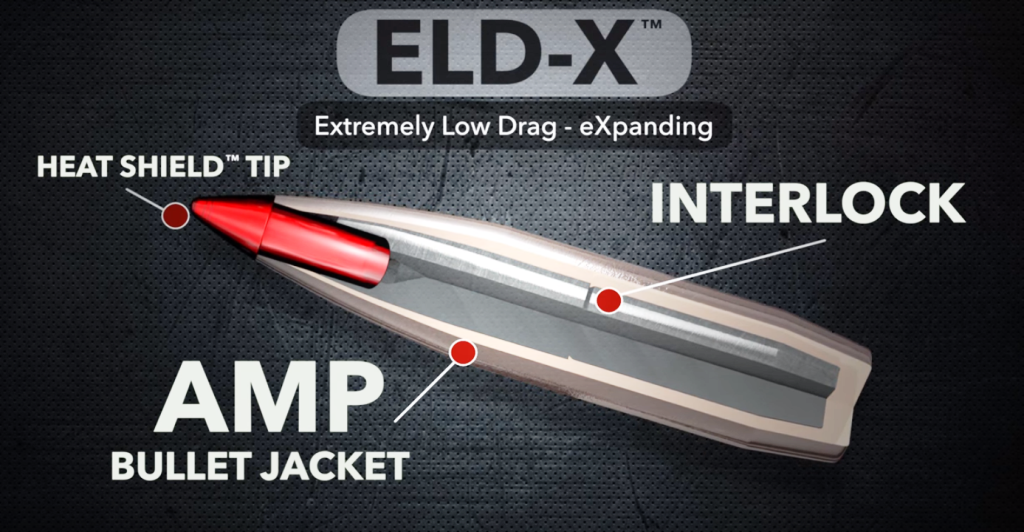 Hornady announced earlier this month via a YouTube video that they would be unveiling something big in the coming weeks. Well, that time has finally arrived. New security safes, reloading presses, and lines of rifle ammunition were all announced today drawing attention in the firearms industry. Possibly the most exciting and ground-breaking though were two little, ol’ bullets. Two new bullets with higher ballistic co-efficients (BC), Match-Grade accuracy, greater expansion for hunting, and a tip that is impervious to the heat created by high velocities.

These concept shattering bullets are called the ELD-X and ELD Match!

The ELD-X (Extremely Low Drag eXpanding) is a bullet that shares a lot of the great features seen in bullets in the industry all in one package. Its most notable feature, and where it gets its name from, is its ability to have a low drag or have low resistance traveling through the wind. When a bullet has a low drag it has a high ballistic co-efficient (a number assigned to bullets to show its efficiency in flight), and higher BC means more accuracy. This bullet should be very popular for hunters because of its Match-Grade accuracy with a devastating impact to match. It has streamlined contours with a Boat-Tail design for greater precision and a higher BC. Hornady also employs their AMP® (Advanced Manufacturing Process) bullet jackets on the ELD-X creating highly consistent and concentric bullets. All of these mentioned features combine for a phenomenal bullet, but the element that is the crowning achievement of the ELD-X is its “Heat Shield Technology” in the polymer tip. Most polymer tip bullets while in flight get extremely hot and will deform or melt to a certain degree. As a result, that marginally hurts the BC and accuracy of the bullet. To fix that, Hornady created a Heat Shield tip which is not affected by the high temperatures created during flight. This maintains if not increases the accuracy in many cases, and in the case of the ELD-X it also helps with expansion of the bullet upon impact. I think the scientific term for that is a double-whammy of awesomeness!

The ELD Match (Extremely Low Drag Match) is a target shooter’s dream bullet. It has the same low drag and high BC of its counterpart; the ELD-X. Hornady states that there is “extreme consistency from bullet-to-bullet, lot-to-lot.” So whether you’re buying some of the ELD Match to reload or some of Hornady’s boxed “Match” series of ammunition you’ll have consistency and accuracy. If that sounds too good to be true Hornady can back up their bold statement with none other than… Science! To map and track the BC of these bullets they used Doppler Radar and modified and corrected as needed according to atmospheric conditions. All of the ELD Match ammunition uses the patent pending Heat Shield tip as well. So even if you’re shooting F-Class in Arizona and its 100 degrees or more outside its no worries, hakuna matata, because your BC will stay consistent and so will your groups.

Definitely some exciting and intriguing bullets coming out of the factory at Hornady! This could be the initial wave of new products being released throughout the industry leading up to SHOT Show this January in 2016. Will companies like Berger Bullets, Nosler, Sierra, or Speer rebuttal with their own introduction of new bullets?… Only time will tell!