Almost daily, I get asked how I got into the firearm industry. When did you start shooting? Where did you get your interest in guns? How do I get my wife/girlfriend/kids/friend interested in shooting like you? Introducing someone new to the shooting sports can be a difficult task. I’ve found some tips and tricks that work time and time again for me.
If someone hasn’t been around guns, they are likely to be afraid at first. How you communicate with this new shooter about firearms will make a world of difference. Even small things like using the word “firearms” instead of “weapons” can help. Weapon is a scary word with a lot of negative connotations. The word firearm is a lot friendlier. Another important step is to start teaching safety when you first start talking about firearms. Mention the fundamental NRA gun safety rules. ALWAYS keep the gun pointed in a safe direction. ALWAYS keep your finger off the trigger until you’re ready to shoot. ALWAYS keep the gun unloaded until ready to use. Explain that these are rules that are ingrained into every shooter from the beginning for everyone’s safety.
Before you ever get to the range, show the new shooter how to stand and hold a firearm (no one likes to shoot if the first shot hurts). Also show the shooter how to load, unload and safely handle the firearm. Snap caps can be especially helpful in this stage. A potential shooter is more likely to take that next step to go to the range if he or she feels comfortable with a firearm before being overwhelmed by ammo, a range, and ear muffs.
Another way to make new shooters feel comfortable is to use electronic ear protection when you do get to the range. For those who aren’t aware, electronic ear muffs activate at a certain decibel level. This allows the wearer to hear low volume noises such as someone talking to them, but the muffs lower the volume of the loud noises (gunshots). While I’m on the topic of ranges, I recommend finding a private range or someone’s farm you can shoot at. It’s more relaxed atmosphere where someone isn’t threatening to kick a new shooter out over a small mistake. Also, ranges are noisy which makes for a more difficult teaching environment. Another benefit of being somewhere private is that the new shooter doesn’t feel embarrassed for not shooting so well or for asking questions that it seems like everyone else knows the answer to.
When you do decide to shoot, I’ve found that new shooters respond better to a smaller group. The attention is more individualized, and it allows the new shooter to feel more comfortable asking questions. Also it’s simpler to listen to two or three people than five or six shouting directions over each other. When men ask me how to get their wife to shoot, I always ask if they have thought to have another woman with them. Shooting is a male dominated sport. It is incredibly intimidating to a woman if the only people trying to help are men. Does she have a female friend who shoots? Do you have a friend whose wife shoots? Invite them along, so she can see that women are just as capable as men. Same goes for getting anyone interested whether it’s a child or friend or wife. Everyone wants to see someone they can relate to shooting because it shows they can too. Once you’ve convinced someone new to shoot, how do you insure they will enjoy shooting when they try it? The gun you take with you makes a world of difference.
The first choice you need to make is long gun vs. handgun. For me this comes down to just a few questions. First and foremost, does the new shooter have a preference? If the person doesn’t, did he or she grow up around hunters? Frequently if someone grew up with a hunting influence, they prefer long guns because it’s what they are familiar seeing. On the other hand, I have a lot people come to me telling me about a bad experience they had with a shotgun as a kid or teen. These people frequently prefer handguns. No matter which way you go, I always recommend starting with a firearm chambered in .22 LR. Just about everyone, no matter the age or size, starts on a .22 LR gun for a good reason. There is almost no recoil. It is fun; and it’s cheap to shoot.
This next point is one I cannot emphasize enough. Do Not Start Someone With A Giant Caliber “For Fun.” It will not be fun for them. Just about everyone has seen those YouTube videos of a new shooter whose gun smacks them in the face or of the rifle that knocks them down. How many of those people do you think go on to become frequent shooters? A moment’s entertainment for you can put this person off firearms for life! Finding a gun that fits the shooter in both caliber and size is an important factor in getting a person to be a lifelong shooter. With that in mind, a lot of people think smaller hands means buy a tiny pocket gun. While a pocket sized gun may not look scary, it isn’t very accurate, and they generally are not fun to shoot. I always try to find a gun that anyone can shoot well and can enjoy shooting because everyone feels better when they hit the target.
Speaking of hitting the target, the targets you choose to shoot at can influence how much a new shooter enjoys it as well. Whenever I take a new shooter to the range, I take bigger targets than I would normally shoot. It again comes down to the fact that everyone enjoys shooting more when they hit the target. I also recommend some type of “splatter” targets, such as Birchwood Casey Shoot-N-C targets, or Champion VisiColor targets. 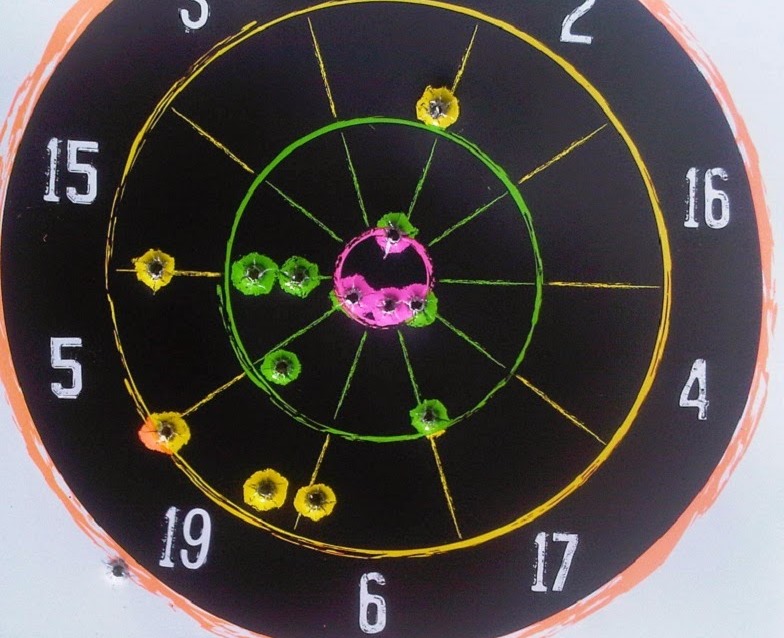 They provide instant feedback on how a person is shooting which allows you to help the shooter adjust, so they shoot better from shot to shot rather than magazine to magazine. Another way to interest a new shooter is to buy interesting targets to shoot at whether they are a dart board, zombies, or a game of battleship. This holds the attention of a new shooter while also inspiring them to practice to shoot better. Plus it makes it fun. The more fun a new shooter has at the range, the more likely the person is to continue shooting.

So there you have it. These tips have served me well in engaging my friends in the shooting sports, and I hope they help you as well. Turning someone into a shooting sport enthusiast won’t happen overnight, but it’s always worthwhile when you have another friend to take to the range.