The news has been devoting a lot of energy to the open carry activists in Texas lately. People across the US have been debating whether this is right or wrong. On the one side of the debate, people are saying “Use it or lose it.” Their point is that if no one uses the law, the law doesn’t need to be kept around. On the other side of the debate, people are asking “Just because it’s legal does that mean it needs to be done?” These people seem to think open carry activists are abusing the law and flaunting their guns which could lead to the current open carry laws being revoked. Is there a clear right answer? 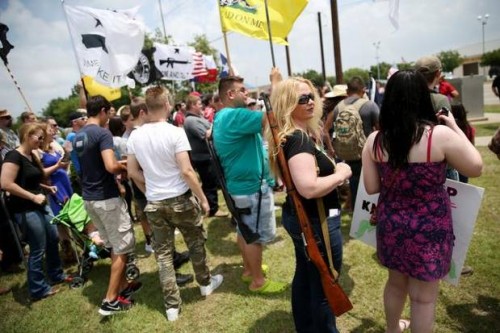 Any person considering carrying a gun has put a lot of thought into this decision. These open carry activists are not an exception. People who carry have to choose between open and concealed carry (see our previous blog post on this topic). This is a very personal decision. Those who decide to conceal have to think about their clothing and holster choice every day as they get ready. They have to figure out if their gun will profile in the outfit they picked out that day. In some cases, the holster that hides the gun in that outfit might not be the most comfortable choice for carrying all day. Open carry is easy. It works with every outfit, and in many cases, it’s the more comfortable choice as one holster (or in this case, sling) fits all.

These activists are openly carrying rifles and shotguns because it is their only choice for open carry. In Texas, handguns must be carried concealed. In fact, Texas gun laws do not even allow concealed handguns to profile through clothing. Although long guns are their only choice, carrying long guns presents some safety challenges that are less obvious when carrying handguns. One of the biggest challenges is muzzle control. It is easy to keep the muzzle pointed in a safe direction on a handgun as most all holsters point the firearm down to the ground. Muzzle control of a long gun is a lot more obvious. Everyone sees the person carrying the long gun, and watches where the barrel is pointed. It’s a matter of safety, and anyone who carries a long gun should be as aware as the people around them where the gun is pointed. Depending on the way a person carries a long gun this might not be a problem, especially when standing and walking, but sitting down or getting in and out of cars can cause muzzle control issues as a person adjusts their long gun. 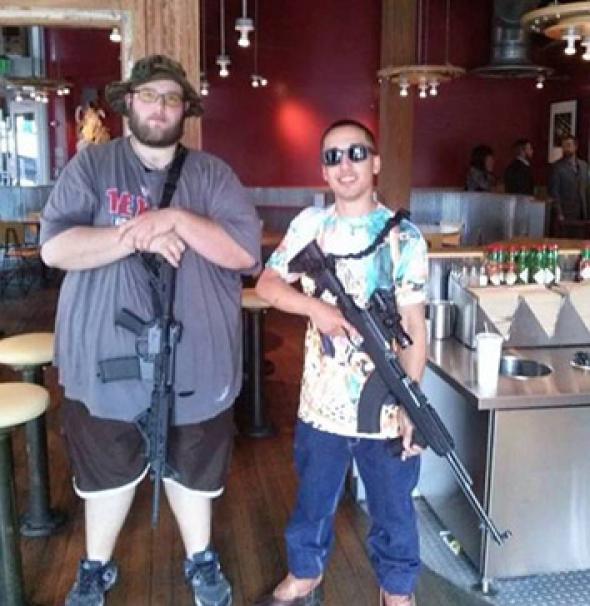 The media seems to be focusing on the open carry activists carrying Modern Sporting Rifles (commonly known as ARs) and AKs. A lot of the general public has come out against Modern Sporting Rifles and AKs, deeming them “assault weapons.” The backlash after the Newtown, CT shooting shows that many people are more afraid of the gun than the people with the guns. These firearms look scary, and to someone who has never been around firearms, it is intimidating to be confronted with one while grocery shopping. Even to a seasoned gun expert, being confronted with one of these rifles unexpectedly can be incredibly intimidating. Some of these activists are carrying SKSs, tactical shotguns, and bolt action hunting rifles. I’m not sure this is better, but the media focuses on those who chose the options with the most negative connotations right from the start. No matter how the media portrays it, open carrying a rifle or shotgun is completely legal in Texas.

The open carry activist groups are receiving a lot of press, but the results of their rallies are getting even more press. As we can all see now, these open carry activists are not getting their way. They are pushing nationwide chain stores, such as Target and Chipotle, to come out with a strong stance on firearms whether for or against. So far, all we have seen is companies coming out against firearms. These companies were previously happy to comply with all local laws without having store policies. Now these stores are asking all gun owners to leave their guns at home. The open carry activists think they are doing the right thing, and it isn’t illegal, so is it wrong or right? What do you think?