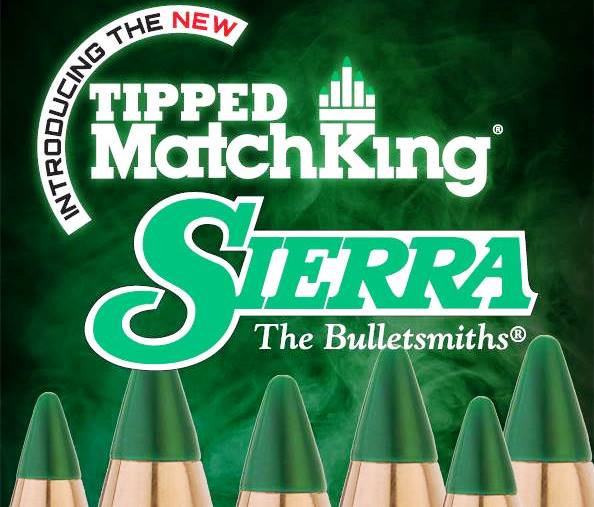 Sierra Bullets has always been on top of the reloading industry with their MatchKing, GameKing, BlitzKing, and other premium rifle and handgun bullet offerings. Last winter  when they announced they would be producing a Tipped MatchKing bullet, with initial offerings in .223 and .30 caliber grain weights, the industry once again got excited to buy Sierra Bullets!

As of right now, Sierra is offering 6 flavors of Tipped Matchkings (TMK):

Just by looking at these offerings of Tipped Matchkings, you can tell that Sierra is appealing to long distance shooters before they inevitably release a significantly larger selection to choose from for all types of shooters.

The beauty of the Tipped Matchkings is that you can use the same reloading data already found in the Sierra 5th Edition Rifle & Handgun Reloading Manual for their Matchking counterparts. Also, you don’t see a huge price increase from the Matchkings to the Tipped Matchkings. The price difference you’ll see at The Guns and Gear Store from TMK to MK bullets is on average $3.00 – $4.00 per box. This is a small price increase for a bullet with an even better ballistic coefficient (B.C.).

Most people may have heard of a statistic called the ballistic coefficient, but fewer understand what it does for you. In a qualitative sense, any bullet with a high B.C. will maintain its velocity better downrange, be less bothered by shifts in the wind, and essentially be flatter shooting. These are all good things for any target shooter; eliminating as much error as possible. Here are the increases in B.C. from TMK to MK bullets:

As you can see, those are consistent improvements in all of the Tipped Matchkings and some of them are pretty significant when the Matchking was already on top of the industry in regards to accuracy! It’s important to note that the Tipped Matchkings are primarily a target or paper shooting bullet. They can be used for small varmints, but are NOT recommended for any game larger than prairie dogs, squirrels, etc.

So stop by The Guns and Gear Store nearest to you, or any sporting goods retailer that carries Sierra Bullets, and try out these new and superbly accurate bullets! You won’t be disappointed.