So you want to buy your grandchild a .22 rifle to introduce them to shooting? No problem. You want to take them to a range that isn’t too much of a trek from your home? Easily accomplished. But you want to have .22 ammo to shoot once you’re at the range? Good luck!

So what gives? Why can no one find .22 long rifle ammunition with any regularity? (All of a sudden, finding unicorn’s blood sounds easy in comparison). There are plenty of theories as to why the existence of .22 ammo seems to be more myth than fact. From my interactions with shooters, reloaders and industry enthusiasts on a daily basis, I have a few ideas. I’ve listed in this blog some of the reasons why you may not want to shoot your .22 caliber firearms so quickly at the range. 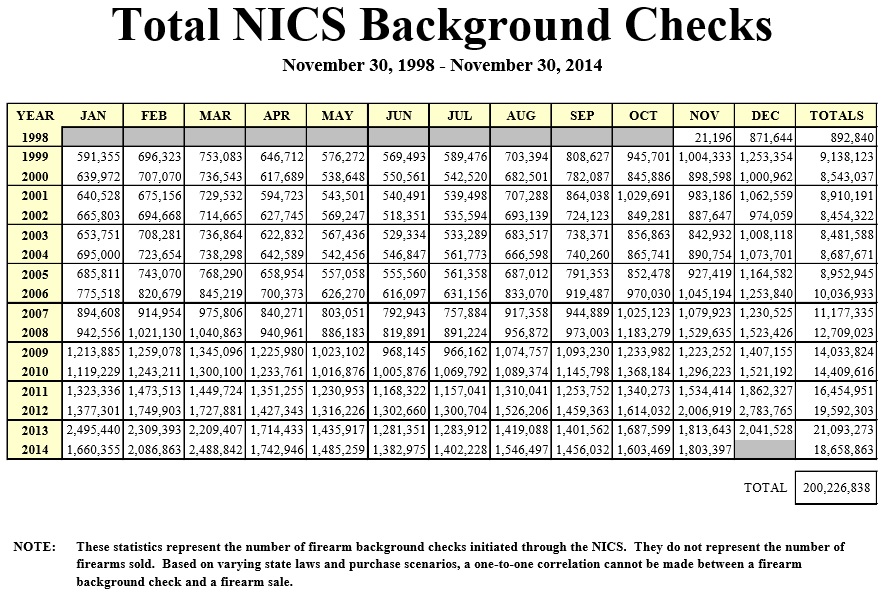 As you can see, yearly totals have risen from just over 9 million NICS checks to over 19 million. With that many new firearms purchased, there is an obviously significant increase in the demand for ammunition, whether it’s centerfire or rimfire: a 114% increase to be exact!

What has also likely had a hand in the shortage is the manner in which today’s shooter, well… shoots. When our fathers, mothers, and those much older than us purchased ammunition, the ammunition was merely a tool to accomplish a task, whether it was to hunt, keep varmints out of the barn, or to safeguard Grandma’s bird feeder from marauding squirrels. Every loaded cartridge had a specific purpose. A brick of 500 rounds would last a year or two, if not longer. Nowadays, with the advent of high capacity magazines and the popularity of such platforms as the modern sporting rifle chambered in .22 long rifle, people seek to boast about how many rounds they fired downrange in one weekend. They tend to care less about how many times they may have hit the center of a target, which requires much more patient, deliberate shooting. I will concede that there still are those individuals who shoot their ammunition in a methodical and practical manner, but this is now more the exception than the rule.

Pricing of ammunition has been a war for retailers and consumers as well, contributing to the supply-and-demand dilemma in which we are all currently receiving an education. When a retailer receives in stock of the coveted .22 long rifle ammunition, how should they price it? Maybe 50¢ a box? Well, that’s less than they paid. How about $10.00 a box? Well, that’s going to cause a fuss as well. If a retailer sells the ammunition too cheap, they’re a fool because they have unicorn’s blood on their hands: something everyone wants and no one can get. A re-seller will come through, clean a store out, and re-sell it at three times the price the retailer charged him. Conversely, if a retailer sells the ammunition slightly higher to make a profit and keep all his lights on, people are in an uproar. Customers will start whispering or possibly shouting statements like: “I can’t believe they charge this much, I remember when it was only 10¢ a box.” Recalling the cost you paid for ammunition 50 years ago isn’t a sensible way to haggle for ammunition, though. A gallon of milk no longer costs $1.00 and a loaf of bread doesn’t cost 19¢ either so it’s unreasonable to expect .22 long rifle ammunition to be on store shelves for the price you heard or saw in 1960. Even with prices higher, .22 long rifle is still the cheapest caliber to possibly shoot. If you own a Sig Sauer® P226 chambered in 9mm and shoot a lot, it can become an expensive hobby. So why not shoot the exact same size framed firearm chambered in .22 long rifle? This exists for a lot of models. The classic model 1911-A1 in its standard .45 ACP chambering can be found in .22 long rifle as well. No matter how “expensive” people perceive .22 long rifle ammunition to be, it’s still significantly less expensive than any other caliber out there.

Another contributing factor is the commonality of .22 long rifle firearms that people own. If I were to pose the question to 100 random firearm owners of: “Do you own a firearm chambered in .30-06 Sprg?” How many do you think would respond yes? Half… Maybe 1/3… Now let’s ask 100 firearm owners again a different question: “Do you own a firearm chambered .22 long rifle?” How many would respond yes to that? Almost all of them, most likely. When everyone goes out and tries to replenish the ammunition for the firearms they own, the .22 long rifle caliber gets hit the hardest. Firearm manufacturers chamber .22 long rifle rounds in semi-automatic pistols, revolvers, rifles, and even over-under combination shotguns. With the caliber being chambered in such an abundance of platforms and so much overlap in people owning it, it is no wonder that the ammunition is scarce.

A lot of people suggest that ammunition manufacturers should simply expand their factories or workforce to curb the demand, but it’s not quite that easy. It’s true that a lot of companies are expanding, such as Remington®, Hornady®, and Federal Premium®. This winter Remington®announced that they’re going to be opening a new facility in Huntsville, Alabama, and will employ 2,000 new employees. This should eventually bolster their ammunition production. Other companies desire to expand, but they have no feasible means of doing so. Hornady® has boosted their production in comparison to previous years, but they still cannot come close to meeting market demands: “The current state of the industry is such that our increase in shipments this year is overshadowed by a 200% increase in demand” (http://www.hornady.com/support/availability). Federal Premium®, who has a facility locally based out of Anoka, MN (relative to our two stores), has been running 24/7 for the past 6 years. A simple question from their F.A.Q. section off their website expands upon this: “Our facilities operate 24-hours a day. We are continually making process improvements to increase our efficiency and investing in capital and personnel where we have sustained demand. We are bringing additional capacity online again this year.” So in short, the industry’s main ammunition manufacturers are trying their best to meet the current .22 long rifle demand, but the demand is through the roof!